Should you be green?

Spend any time at or even going to a ski area, and you’ll find earnest proclamations of “green” activities: We divert N tons of trash from landfills through a vigorous recycling program, and we even recycle grease, to power our grooming equipment. (Landfills are bad!) We purchase purchases X percent of our electricity from wind turbines. (We reduce our dependence on foreign oil!) We reduce our carbon emissions by X percent. (Global warming. Climate change.)

Don’t get me wrong. Clean air and clean water are good. I enjoy not having to boil water or breathe air that make me wonder what’s going into my lungs. (I’ve been to China.)

But at least here in the United States, we have eliminated or mitigated most of our environmental problems, making the world, or at least or our part of it, cleaner than it has been. (See the Environmental Trends for some encouraging statistics.)

Having brought some much-needed attention to some problems with the natural environment, the green movement runs several risks, including  achieving minimal improvements at significant economic costs. Another is that it introduces counterproductive incentives. (Under the Endangered Species Act, many landowners have an incentive not to protect species on the list but to “shoot, shovel, and shut up” any such animals they see on their land, the better to prevent the ESA from prohibiting any development.) Green laws also raise a number of political and legal questions about the proper relationship between government and the individual, between public goals and personal liberties and property rights, and even, at some point, religious questions.  The cause of a “clean” environment suffers when it is pursued with a zeal without sufficient knowledge and prudence.

So to make the confession obvious: I enjoy places where people go snowboarding and skiing, but I’m not on the green bandwagon.

Still, green is certainly in force wherever you go in snow country. Take Vermont, for example. Its nickname is the “Green Mountain State,” an anglicized version of the French words “Vert” and “Mont,” or green and mountain. (Of course, at the time the nickname gained currency, “green” simply referred to the color of the trees.) The Burlington airport, an entry point to the state for people outside the region, has several displays touting its minimal carbon footprint, or something like that. The Grand Hotel at Killington Ski Resort has the signs, common in the hospitality industry, encouraging guests to re-use their towels rather than send them to the laundry after one day’s use. (This admonition strikes me as very sensible.)

When it comes to renewable energy credits (today’s form of penance) as a marketing strategy, the most amusing may be the one used by Killington. As you board the K-1 Express Gondola, you may notice a static display that touts … cow flatulence. 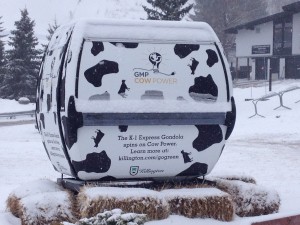 The next time a cow farts in Vermont, thank her for powering the K-1 Express Gondola.

As is the case with “renewable” energy generally, electricity from cow power is more expensive than that generated by coal or natural gas. In other words, it’s less efficient, and customers who use it pay more than they would otherwise. Green Mountain Power says “For every kilowatt-hour requested by customers and provided by a Vermont farm, we’ll pay the farmer for the energy at rates set by the state, plus the Cow Power charge of 4 cents for the environmental and renewable benefits of the generation.”

Still, it’s a nod to the state’s dairy tradition, so it’s understandable that if the resort is going to pay more than it needs to for electricity — a practice that will be build into your lift ticket, — it might as well sell cow farts.

I don’t doubt that “going green” is good for the tourist business. Who wants to be seen as pro-pollution, for example? But I also don’t doubt that many people who encourage us to “go green” do so out of a sincere conviction.