The history of snowboarding 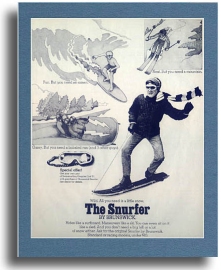 An advertisement for the Snurfer

While snowboarding became popular in the 1990s, its origin goes back to the early 70s, and probably much earlier than that. The Colorado Ski and Snowboard Museum asks, “How old is snowboarding, anyway? Well, the short answer is: no one really knows.”

Still, we like to make sense of our origins, and since this page has proven to be one of the most popular ones on the Grays on Trays website, let’s get started. Here’s our attempt to make sense of it all.

A (very brief) timeline of snowboarding: