Human activity works best when you have some basic understanding of people act in crowds–as in, say, traffic laws. But did you know there are some “traffic laws” in the slopes? These laws, plus some basic consideration for others, makes snowboarding and skiing safer and more pleasant. 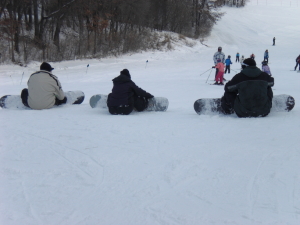 Don’t do this! These three riders are obstructing the exit are from a chairlift.

Safety first
One place to start is the responsibility code, which was created by the National Ski Area Association.

Though not part of the responsibility code, the guidelines are useful for your own safety as well as for the general well-being of the world of snowboarding.

A little courtesy
Here’s our unofficial list of principles to live by on the slopes and at the hill. As a rule, be aware of how your actions may affect everyone else. As someone said many years ago, love your neighbor as yourself; treat others as you would like to be treated yourself. How can you practice that?

One Response to Snow etiquette