Grays on Trays came about, in part, out of our frustration at not being able to find books on snowboarding that were not written for the juvenile department of the public library. Over time, a few books have surfaced, though much of the information on snowboarding has shifted to the internet. And some books now come in electronic format, such as a PDF or a file suitable for reading on a Kindle.

We think there is still room for something that is compiled in a form of a book, even if it’s not on paper. You’ll see that many of the books on this list are old and dated. Indeed, the evolution of the sport is such that some of these books may reference products that don’t exist anymore or offer instructional tips that are no longer the industry standard. For that reason, you may wish to emphasize the more current books in your reading.

There are various ways of learning something, so for those verbal learners out there, here’s your list. But be sure to get some real-world instruction, preferably from an AASI-certified instructor at your favorite ski/snowboard resort.

“Snowboarding is extreme, and that’s why we love it,” starts this self-published book that offers some information on most topics you’ll need to know about snowboarding.

Truth be told, snowboarding can be extreme, if that’s what you want.  “The six steps of progression” part of the book outline what you need to do to attain an intermediate stage of riding. Beyond that, you’ll have to practice and, the author says, perhaps a physics book might help.

But back to the beginning. The book starts off with rider etiquette and how to adjust your bindings (deep squats? Perhaps, but many riders won’t ride that way). It then moves to things you consider in clothing, boots, bindings, snowboards, and helmets before discussing trail-rating systems and on-mountain safety concerns (Carry mace to ward off animals?)

“The fun of snowboarding comes from pushing yourself, proving to yourself that you did something today you weren’t capable of yesterday,” the author says late in the book. And that proving to yourself (and proving yourself) starts on the first day: “Your first day of snowboarding is merely an exercise in survival, but as you progress you begin to thrive in the face of adversity.”

“How to snowboard” doesn’t have the mental coaching that “Snowboarding is for Adults” does, nor does it do much to address the value of (or what to expect in) lessons. But it’s a good complement to that book.

Snowboarding is for Adults Rosemary Kelly, 2016.

The author, who was 61 years old when she wrote it, explicitly says that it’s not an instructional book. And it isn’t, in the sense that it doesn’t tell you how to start or end a turn, let alone how to carve. But the person who has never been on the snow (and even many who hae) can learn a lot from this electronic-only version (available in Kindle, PDF, or e-Pub format). “My intention,” she says, “is to get you off the couch and on the snow.” That’s a worthy intent, and Kelly delivers with important-to-know information about snowboard equipment and clothing, as well as how a snowboard lesson works.

The book starts off, though, with a big helping of “adjust your attitude” and “you can do this.” Embrace the challenge of a new experience and well, don’t be afraid of making a fool of yourself. The payoff will come.

Even a veteran snowboarder may find some overlooked recommendations. Here’s one observation we like a lot: Take a lesson on your first day, and do it in the morning. Don’t go out on the slopes and try to figure it out first.

We would differ from the author in a few small points. The text sells short alternatives to strap bindings, and it states that most ski areas require snowboarders to use a leash. While we use a leash, we haven’t seen one required in quite a while. But none of that takes away from the overall recommendation: If you’re new to snowboarding, you need this book.

Snowboarding is for Everyone, Dominic Kelsey, 2016.

Our favorite chapters are “Lessons for beginners,” because everyone should start with a lesson or two, and “Don’t sneer at the bunny hill,” which is where such lessons occur. There are over two dozen appendixes, called “bonus articles.” Most are short profiles of various ski areas and read like advertorials. One bonus for history buffs is a page or two that reprints text from the Muskegon Chronicle about the Snurfer, one of the progenitors of the snowboard. It has some recommendations for exercises and training off the snow.

The hip flexor lunge, advanced triangle stretch and triangle press-ups are just a few of the exercises you will find in in this book to help you improve your physical conditioning for the snowboarding season. Yates is a dance, yoga and fitness instructor.

Teeter is a professional snowboarder with medals earned at the Winter X Games and Olympics; The two introduce readers to snowboarding, from what to expect on the first day to what competitive riding is like.

The first half of the book covers the basics of equipment and hill operations, your first time in a snowboard, and eventually, how to link turns.

The second half of the book deals with a variety of tricks that range from basics such as ollies and frontside 180s to more advanced moves such as the crippler and Michalchuk. Tucked in the second half is a small but useful chapter on various exercises that can make anyone into a better rider.

If you’ve watched martial arts movies, you may have a sense of the feel of this book. Martin is a big fan of Bruce Lee. Martin makes heavy use of “shoulder steering,” and on many occasions labels the technique taught by the American Association of Snowboard Instructors as wrong. Even if you do not buy into his approach, which he says is patented, there are still some useful sections in the book, such as the chapter on reading the terrain.

Snowboarding for Women: A Guide for the Shred Betty Wannabe, by Chickie Rosenberg, Showdog Snowboard, 2004, 192 pp.

At age 50, Chickie Rosenberg started snowboarding after 30 years of skiing, and one torn ACL. That was in 1990. She died in 2013, but her legacy includes two books. This is one of them.

A follow-up work to Snowboarding for Women, this book takes a somewhat different tone, but comes from the same author.

Snowboarding Skills: The Back to Basics Essentials for All Levels, by Cindy Kleh. Firefly Books, 2002, 128pp.

In addition to offering both a glossary and an index (an unusual combination in this genre), Snowboarding Skills spends a lot of time on “the back-to-basics essentials,” as promised in the subtitle. The chapter “board basics,” for example, starts off on the topic of how to walk with one foot secured to the board–one of the early, difficult tasks of learning to ride.

With lots of step-by-step photos, the first two-thirds of the book is a solid introduction for novice through intermediate riders, and lends itself well to those looking to get started, or to develop into solid cruisers. The last third of the book gives a too-quick whirl through riding in the park, pipe, and various snow conditions. More advanced riders will want to consult Kevin Ryan’s book (see else where on this page).

As the subtitle (“A Woman’s Guide”) suggests, the book pays special attention to the needs of women. Can you ride while pregnant? One woman explains why she did. (Note: the publisher of this website, who is not a physician, wishes to point out that many websites dealing with sports and medicine strongly recommend against engaging in fall-prone activities, such as snowboarding, during pregnancy). How should physical differences between the sexes affect equipment (women’s feet tend to be more narrow in the ankle and forefoot, for example).

“Grays” of either sex will appreciate the photos and references of older riders, some into their 50s. “Hey, I can do that” becomes more real when you see people of your own age.

Like most books I have seen on the subject, “Snowboarding: A Woman’s Guide” takes a while (three chapters) to get down to discussing the actual techniques of snowboarding, but offers a solid introduction to the fundamentals that will help any rider.

Carlson opens and closes the book with thoughts on why it may be worthwhile for adults to learn how to snowboard. The book opens with the practical (less equipment than skiing) and closes out with mini-narratives of riding (carving, in powder, trees, carving, bumps, and terrain parks) that invigorate the spirit.

Ryan packs a lot of material into the book. The early chapters deal with the most important piece of equipment an adult rider can have — the brain —and proceeds through techniques and tricks that may be beyond the grasp (or interest) of some. Nicely graded. If you’re an intermediate or advanced rider, jump into the chapters just for you. There’s something good about having a book that you can grow into. Ryan is also a friend of Grays on Trays. See the article on bootfitting that he contributed to the site, for example. 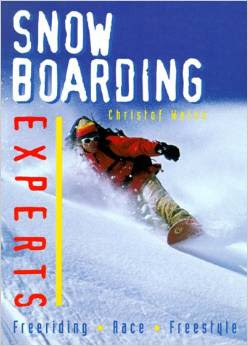 The state of snowboarding, 1998

This book is translated from the German, and it shows. The English translation is stilted and reads at times like an academic paper rather than something meant for a mass audience. It is meant, furthermore, not for the beginner or even the competent casual recreational rider, but for someone who wants to reach the top level of competition. There’s a heavy emphasis on racing in hard boots that is out of place with most of today’s snowboarders, and fans of freestyle progression will find the description of tricks near-prehistoric. The parts about general physical training may still be useful, but developments in gear, the teaching of snowboarding techniques, the practice of most snowboarders, and the politics of competing organizations that sanction competitions have all rendered this book obsolete. History buffs may appreciate the references to snowboard pioneers such as Craig Kelly and Terje Hakonson, not to mention neon clothing.

An oldie but goodie, this book, published way back in 1997, roclaims that snowboarding “is no longer solely the province of rebellious, image-conscious adolescents. In fact, the segments of the snowboarding population that are expanding the most are adults, small children, and women.” Like most of the books here, it takes you through the basics and then has separate chapters for making adjustments for powder and ice.

One Response to Books on snowboarding