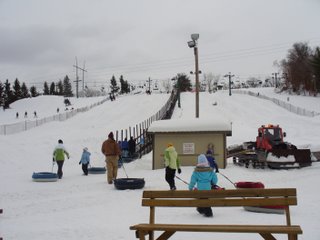 If you’ve learned how to snowboard, you’ve accomplished a lot, especially if you’re an adult who wasn’t previously physically active. But once you have that down, why don’t you try something that, though it requires no skills, is difficult in its own way? I’m speaking of snow tubing.

When I went tubing for the first time since I had learned snowboarding, it helped me see the slopes in a new light, and gave me a strange new appreciation for tubing.

The trip all came about because some friends from Taiwan wanted to experience winter sports. They had first thought of going skiing, but then decided it would be too much work. I agreed. After all, they had never been on snow before–let alone skis–and I didn’t know how well they would handle the cold. Plus, I got the feeling that they would want to just step into skis and flail about on the bunny hill. I didn’t think that was a good idea, so I was encouraged when they thought that tubing would be a good alternative. And at $14 for a 2-hour session, a one-time tubing excursion was going to be a lot cheaper than buying a lift ticket and renting skis.

So our little party paid our money and headed for a chalet set up just for tubing.

The tubing doesn’t happen out on an open hill, where you might be sideswiped by somebody else in a game of bumper-car tubing. Instead, the tubes slide down in chutes, or lanes. That way, you can harm only yourself, not everyone else. (Speaking of injuries, you might detect in the photo below that the tubing park is right next to a terrain park! What an interesting juxtaposition.)

How much energy does it take to go tubing? It depends on the setup of the hill, but the answer is “more than you think.” The most primitive setup for tubing is human-powered: To get to the top of the hill, you walk. In a slightly easier arrangement, you get pulled uphill as you sit on or in the tube. A more convenient way to get uphill, which is what we had at our disposal, is to stand on a conveyor belt. A more upscale version adds a roof over the belt.

Though we were glad to have the conveyor, it presented its own challenges. It was framed on either side by guardrails, and when I look at this next photo, I get the feeling that I was crossing a deep river gorge via a narrow, rickety bridge. 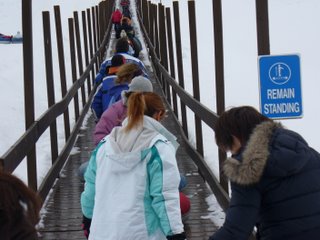 Standing on the conveyor is no “gimmie.” Yes, it is on a bunny hill, but even so, it’s on a grade, which means that standing on the belt is a workout for the calves. There’s a reason why treadmills offer the option of adding an incline: Walking uphill is more demanding, and even standing takes more muscle power when its is done on an incline.

Then there’s the tube, which is lightweight but bulky. The tube, by the way, is more than just a rubber doughnut. It has fabric that envelopes the walls, and a plastic sheet that covers the bottom.

If the tube is wider than the conveyor/magic carpet, as it was in this case, you can’t simply stand and let the carpet whisk you effortlessly to the top. You’ve got to hang onto the oversized piece of blubber that just seems to get grabbed by the ramp every 10 seconds, pulling you along with it.

When you leave the carpet, you have to carry or drag the tube behind you. When I dragged my tube, it tended to wander, making it more difficult to control. I often carried it, and was surprised at how much effort that simple task that took.

Being on a tube made me long for my snowboard, for this simple reason: I’m more in control on a board. On a tube, I’m at the mercy of gravity and the vagaries of the chute that I was in. This lack-of-control made me glad that I was already wearing my helmet from an early-morning session of snowboarding. Did I feel dorky wearing a helmet in the tubing park? Certainly. Then again, hard-packed snow is hard-packed snow, and wherever it is, it’s not a good place to slam your head.

During most of my trips on the tube I sat down with my feet hanging out in front. In that position, I could dig into the snow and not simply spin ’round and round. Sliding down out of control is a large part of the thrill of tubing for some people, but it wasn’t for me. Digging into the snow did spray snow up toward my face, but thanks to the goggles I was wearing, I never got any in my eyes. For a change of pace, I slide down on my stomach. That was hard on my back.

Once your trip is done, it’s not advisable to linger at the bottom of the chute, since the next person coming down the chute could run into you. The attendants do try to space everyone out, but still, it’s good to pay attention yourself.

The attendants also tried to make sure that only two tubes were attached (at most) for any run, but our group managed in going down, four tubes loosely connected. Fortunately, nobody got expelled.

My most unusual trip down may have happened when one of the girls, heading down the chute just before I was set to go, got tossed out of her tube fairly on. Her tube slid towards the bottom of the chute without her, and she started to make the long walk down the hill, inside the chute.

She was wearing tennis shoes, which I didn’t think were will suited to the task. So I slid down to where she was walking, and invited her to take the ride down with me. To be more correct, I tackled her and sat her in my lap, but we survived anyway.

I was actually glad when the two hours allotted by our ticket were up, and I think the rest of us were pretty tired, too. For a visibly “passive” activity, tubing can be pretty active! Everyone else must have agreed, since no one suggested that purchase another two hours worth of time.

So there you have it. If you’ve got someone who has no experience sliding on the snow, take them tubing. It won’t help them ski or snowboard, but it will let them know that sliding can be fun.

If you want to experience the snow in a different way, go tubing. As long as you don’t hurt anyone in the process, there’s no wrong way to enjoy the mixture of gravity and snow.